December 02, 2019
It figures that since I plan on posting monsters here using a customized stat block, that I should offer some explanations on how to use it.

First things first, though: this stat block is heavily inspired by the one published by Humabout on Above the Flatline. A through explanation as to why it is designed the way it is can be found on the previous link, all credits to him. Some basics are summarized below, along with explanations on some additions I've made.

All in all, I feel the stat block is quite intuitive and can be used nearly instantaneously. Without further ado, here it is. 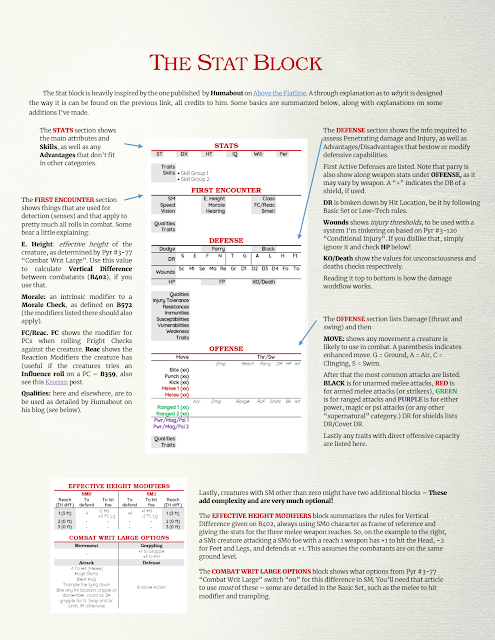 The STATS section shows the main attributes and Skills, as well as any Advantages that don’t fit in other categories.

The FIRST ENCOUNTER section shows things that are used for detection (senses) and that apply to pretty much all rolls in combat. Some bear a little explaining:


The DEFENSE section shows the info required to assess Penetrating damage and Injury, as well as Advantages/Disadvantages that bestow or modify defensive capabilities.

First Active Defenses are listed. Note that parry is also show along weapon stats under OFFENSE, as it may vary by weapon. A “+” indicates the DB of a shield, if used.
The OFFENSE section lists Damage (thrust and swing) and then
Finally, creatures with SM other than zero might have two additional blocks – These add complexity and are very much optional!
And that's if for the Stat Block. I hope you find it useful in running your encounters.

Tinkering with Conditional Injury, part I

I’m a big fan behind the spirit of Pyramid #3-120 “Conditional Injury” article by Douglas H. Cole. By taking HP as the starting point for a new entity called Robustness Threshold, he introduced a “Wound” system for GURPS that dispenses with tracking HP, make less likely that a character would die from a “1 HP injury” and it seems, to me at least, more realistic.

For it all to work, he also modified wounding modifiers (like the x1.5 damage that cutting attacks have) and hit location modifiers (like the x4 damage the skull). This is a part I don’t like very much, if only because I’ve grown too accustomed to standard GURPS values for these things and can’t wrap my head around the changes. There’s also one additional table look-up in his system to figure out how much injury is dealt, and modifications for several advantages.
I’m pretty sure he did all of that with the power of math behind him. Well, that I do not have, but nonetheless here I present an adaptation on his system that aims to … 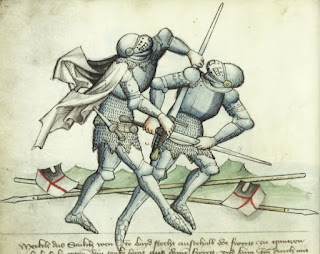 GURPS 101: Melee combat types and how they interact

In GURPS 101 I try to explain general GURPS concepts, hopefully clearing confusion along the way.

After reading the chapter, you'll notice a few terms are used through it: Melee Attacks, Unarmed Attacks and Grappling. Now, taken at face value, these are all self-explanatory. The way they are organized within the chapter (B369) is this:
Melee AttacksUnarmed CombatGrapplingMelee Attacks encompass both Armed and Unarmed combat (though Armed is not specifically listed under a header). Also, the way things are laid out suggest that Grappling is a subset of Unarmed combat, which would be fine in and out of itself, except that GURPS let's you grapple with weapons. Even more confusingly, for "standard human" characters (by that I mean SM 0) Unarmed combat and grappling almost always require stepping into Close Combat (which is just … 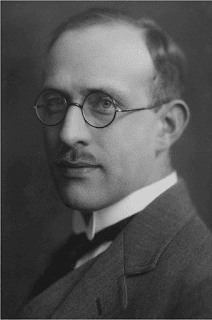 If you read some Call of Cthulhu, it's only natural to want to create an investigator! In a bit of a divergence from the classic New England chaps usually associated with the genre, Joaquim Cruz is a Brazilian anthropologist, interested in regional folklore and more obscure knowledge...